Around 1914, Joseph Pilates was a performer and a boxer living in England, and at the outbreak of WWI, was placed under forced internment along with other German nationals in Lancaster, England. It was at this time that he began devising the system of original exercises known today as "matwork," or exercises done on the floor. He called this regimen "Contrology," meaning 'the science of control'.

A few years later, he was transferred to another camp on the Isle of Man, where he became a nurse/caretaker to the many internees struck with wartime disease and physical injury. Here, he began devising equipment to rehabilitate his "patients," taking springs from the beds and rigging them to create spring resistance and "movement" for the bedridden. 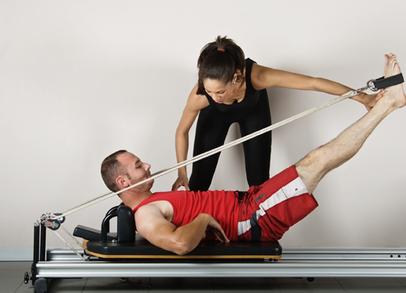 Over the last 20 years, Pilates has experienced the explosion on a global level. Pilates is a method of exercise and physical movement designed to stretch, strengthen, and balance the  body. With systematic practice of specific exercises coupled with focused breathing patterns, Pilates has proven itself invaluable not only as a fitness endeavor, but also as an important adjunct to professional sports training and physical rehabilitation of all kinds.

Practiced faithfully, Pilates yields numerous benefits. Increased lung capacity and circulation through deep, healthy breathing is a primary focus. Strength and flexibility, particularly of the abdomen and back muscles, coordination - both muscular and mental, are key components in an effective Pilates program. Posture, balance, and core strength are all heartily increased. Bone density and joint health improve, and many experience positive body awareness for the first time. Pilates teaches balance and control of the body, and that capacity spills over into other areas of one's life.